CLOSED SATURDAY, MAY 21ST (we are closed on Long weekends)

Bison Farming in the Oak Ridges Moraine of Ontario 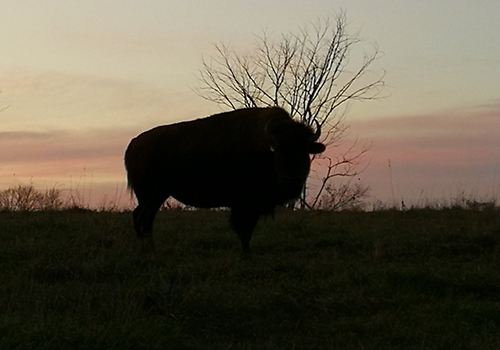 A Natural Habitat for Our Bison

The Oak Ridges Moraine is the perfect and natural habitat for the Plains Bison, and other at-risk species of plant and animal.

Carved out of the landscape during a glacial recession, the 1900 square kilometre Moraine cuts a swath all the way from the Niagara Escarpment to out past Peterborough in Ontario. The rolling, grassy hills of the Moraine are the perfect stage for Bison to inhabit. Learn More »

The Oak Ridges Moraine have been a contested region for some time, as several conservation groups and governments work to stave off real estate development that would have the potential to destroy the homes of several at risk species, including Red Shouldered Hawks, Jefferson Salamanders and even plant-based ecosystems like Tallgrass Prairie. These species, like the North American Plains Bison, need protection. Several large communities around the Moraine also rely on the geological mechanics to provide fresh, clean drinking water.

How We Can Help

Today, several coalitions exist with the goal of conservation in the Oak Ridges Moraine. The most powerful coalition, STORM (Save The Oak Ridges Moraine) has been working since 2000 to ensure the survival of it's natural species and the maintanence of the plentiful fresh drinking water nearby communities rely on.

We Have a Passion for Bison